State-of-the-Art Technology & World-Class Testing Methods.
Our leading-edge equipment and proven methodologies help us "find out". You can depend on RTL to utilize the most sensitive equipment, proven processes and highly skilled personnel to deliver timely, accurate and reliable results. We'll find out—using the optimal combination of gas chromatography-mass spectrometry (GC-MS), liquid chromatograph-tandem mass spectrometry (LC-MS/MS) and enzyme immunoassay (EIA). Learn more about these industry leading technologies and methods below.

RTL's objective is to help its clients detect and prevent drug and alcohol abuse. Urine and oral fluid testing through RTL is reliable, affordable, and convenient. Turn to RTL for confidence in testing–we'll find out. 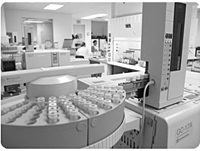 To help us find the answers we use gas chromatography-mass spectrometry (GC-MS), the gold standard" of the industry. GC separates the components of a mixture and MS characterizes each component individually. By joining the two techniques we can qualitatively and quantitatively evaluate many chemical compounds.

It's the gold standard in drug testing because it positively identifies the presence of a particular substance in a given sample. The GC-MS method is ideal for confirmation testing performed on a second independent portion of the original specimen.

GC-MS analysis conclusively identifies a compound based on retention time and fragmentation patterns—chemical "fingerprints". The GC contains a column of inert gas under heat that retains and separates compounds based on their volatility and chemical interactions with the column. Typically, different compounds are retained in the GC at varying times and thus can be identified based on their "retention time". As a drug comes off the column, it traverses into the MS which bombards it with electrons causing the drug to fragment into smaller charged molecules that are unique to that drug. These charged molecules can now be detected and a mass spectrum is produced to identify the drug. Thus each drug is identified — "fingerprinted" — based on its retention time and the types of fragments that are produced. 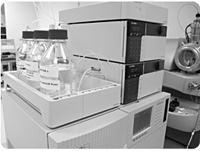 Liquid chromatography-tandem mass spectrometry (LC-MS/MS) combines the physical separation capabilities of liquid chromatography with the mass analysis capabilities of mass spectrometry. LC-MS provides very high sensitivity and specificity. When a second phase of mass fragmentation is added, it's called tandem MS or MS/MS. MS/MS is an even more powerful technique to "find out" — to quantitate low levels of target compounds in the presence of a high sample matrix background.

Unlike gas chromatography, which is unsuitable for nonvolatile and thermally fragile molecules, liquid chromatography can safely separate a wide range of organic compounds, especially small-molecule drug metabolites. In fact, the combination of these two powerful techniques (LC-MS) gives us the ability to analyze virtually any molecular species. Mass spectrometry is capable of providing structure, molecular weight, empirical formula and quantitative information about a specific analyte (drug). Mass spectrometers also generate three-dimensional data. In addition to signal strength, they generate mass spectral data that provides valuable information about the molecular weight, structure, identity, quantity and purity of a sample. The use of MS/MS adds tremendous specificity and sensitivity to the analysis of compounds. This is due to the system's ability to isolate the target compound's molecular ion, all but eliminating the likelihood that an interfering compound of the same molecular weight may be simultaneously in the source. 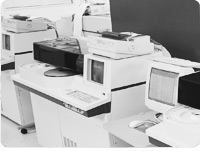 Generally a first step in our process of "finding out", enzyme immunoassay (EIA) is a biochemical methodology that detects the presence of multiple drugs and/or drug metabolites. By utilizing antibodies raised against a specific drug, EIA offers consistent reproducibility of results. The outcomes are therefore more accurate and dependable.

EIA is used for qualitative detection of medications and illicit substances. The EIA methodology involves a specialized enzyme mixed with analyte-specific antibodies. If the analyte (drug) is present in the specimen, an active enzyme forms, creating a change in color that can be measured on a device called a spectrophotometric analyzer. The amount of enzyme formed is proportional to the amount of analyte that is present in the specimen.